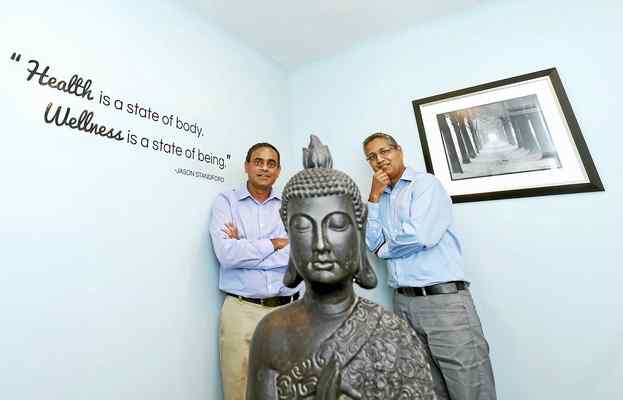 MILFORD >> Tejal Desai and Raj Patel and their partners want to bring the personal touch of independent pharmacy to the field of medical marijuana, and that’s a big reason why they’re opening a dispensary called Southern CT Wellness & Healing.

“It’s an extension of an individual pharmacy,” said Patel. “That’s how I look at this, where the pharmacist knows

[a patient’s] name, they know our name.”

Patel and Desai, along with co-owners Jay Patel and Deepa Desai (Tejal’s wife) are the four pharmacists who plan to open their dispensary later this week at 318 New Haven Ave., Unit B.

From the Buddha statue in the waiting room to the photos of beaches and wooded pathways on the walls, the feeling at this dispensary is one of peace and tranquility. But this is a serious venture into the cannabis field.

Patel was licensed in India; the other three are graduates of the University of Connecticut’s School of Pharmacy.

“The patients coming in, they’re coming for a reason,” Desai said. “Other medications haven’t worked and they’re looking for the therapeutic benefit” of medical marijuana. “I think there’s a relevant need for it.”

He added that marijuana may be used as a substitute for opiates, which have been overprescribed and lead to addiction and, increasingly, fatal overdoses.

Unlike a planned dispensary on West River Street that’s drawn opposition from neighboring homeowners, the New Haven Avenue dispensary is not in a residential area and did not create controversy in the city.

Medical marijuana as an industry has grown in Connecticut, with four growers and, soon, nine dispensaries, a 50 percent increase in retail outlets. Besides the two set to open in Milford, a new dispensary opened recently in Waterbury. Owners of each dispensary paid a $5,000 fee to the state for the right to open.

“I think it’s a very fortunate thing that’s happening,” Desai said. “Opiates are being overused. … I’m not saying this is for everybody but I think this is an alternative.”

Each of the four co-owners of Southern CT Wellness & Healing has a minimum of 20 years’ experience.

“My wife was at Hartford Hospital,” said Tejal Desai. “She is a clinical pharmacist. She specializes in pain.”

Desai said he has a background in oncology and psychiatry, so he’ll work well with patients who have symptoms of cancer or chemotherapy as well as those with post-traumatic stress disorder. Raj Patel’s experience is in retail pharmacy, while Jay Patel has a certification in HIV/AIDS.

They’ve learned about medical marijuana through research online and in continuing-education courses, Patel said. “And we’ve been talking to the growers also, and they’ve been really helpful,” he said.

Patel and Desai said they plan to take a holistic approach to palliative care, working with neighboring massage therapists — there’s one in the same building — and local yoga instructors. Those services will supplement the various formulations of medical marijuana, which can be smoked, eaten in cookies, vaporized or used as a tincture under the tongue.

But the co-owners of Southern CT Wellness & Healing say they’re serious in their desire to offer palliative care in a professional environment.

“We want this to be a medical approach so we have three consultation rooms if they wanted to speak to us in privacy,” said Desai.

Patients will be given an initial consultation to determine their medical condition and what other medications they are using.

Desai said the Buddha in the waiting room is not meant to be overtly religious — neither of the partners is Buddhist — but connotes “tranquility, peace, just a state of mind for us. People are coming in here having a lot of issues” and the owners want their environment to be soothing.

Medical marijuana is different from other pharmaceuticals in that doctors, who must register with the Department of Consumer Protection, certify their patients to be able to buy cannabis but don’t actually prescribe it. The patients, who must register with one dispensary, then work with a pharmacist to determine which formulation works best for their conditions. Products range in levels of active cannabinoids, such as THC and CBD.

“One of the producers might be using one strain to make the vaping pens while another might be using a different strain,” Patel said. “You get different therapeutic benefits depending on the strain.”

Marijuana acts on receptors in the brain, such as those that make us feel pain, as do opioids, so Desai said there are similarities in prescribing cannabis.

“It’s just like any other medication,” he said. “We’re trying to hit a receptor and see a benefit.”

“I think all we want to do is improve the quality of life” for patients, Desai said. “That’s our mission.”

There are 17 conditions that can be treated with marijuana, from cancer to glaucoma to epilepsy and PTSD. Patients under 18 years of age will be eligible for certain conditions as of Oct. 1, and adults will then be eligible to be treated for the additional disorders, including cerebral palsy, cystic fibrosis and end-of-life care for terminal illness.

As of July 17, there were 11,750 medical marijuana patients in Connecticut, according to the Consumer Protection Department’s website. New Haven County has the most, with 2,859, with Hartford County, at 2,652, and Fairfield County, at 2,519 follow. Milford is closest to several towns in Fairfield County. Fairfield County’s only dispensary is in Bethel, which is in the northern part of the county.

While the New Haven Avenue dispensary, located in a commercial area, has not been the target of protests, the West River Street location, to be run by Angelo DeFazio, has upset residential neighbors who fear traffic and a possible influx of criminal elements. DeFazio, owner of Arrow Pharmacy in Hartford, also runs Arrow Alternative Care, a medical marijuana dispensary in the capital city.

DeFazio did not return a call seeking comment on his dispensary, but a spokeswoman for the state Department of Consumer Protection said it is still scheduled to open.

Dispensaries, as well as growing facilities, are protected by high-security systems. Patients coming to the New Haven Avenue location must enter through two locked doors.

“I am concerned about the traffic,” said Gail Haas, who has been an opponent of DeFazio’s facility. “But also we just have this uneasy feeling that it could somehow draw some criminals into the neighborhood.

“We all have sympathy for these patients who are in extreme pain,” she said.